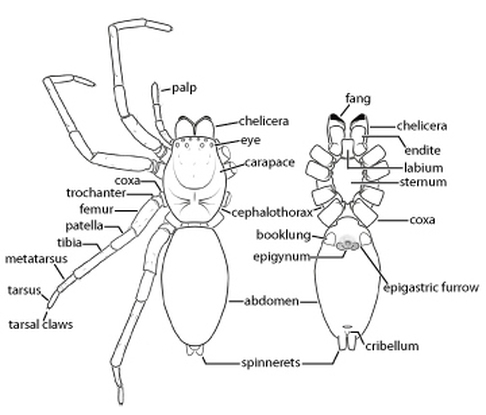 Anatomy of the spider (image: wikimedia commons)
﻿Anatomy and Biology of Spiders﻿
The development of silk glands and spinnerets distinguishes true spiders from other arachnids (Gertsch, 1949). In addition to spinnerets, spiders share other similar characteristics of anatomy and biology.  Studying the anatomy of spiders, and especially their method of reproduction, is important in order to understand the immense biodiversity of spiders.  The anatomy of spiders is simple:  spiders have two body sections, eight legs, and a pair of pedipalps (Snow, 1970).      The mouthparts of spiders, located at the front of the cephalothorax,  include the chelicae (jaw) with fangs.  Most spiders are venomous and rely on venom to kill or immobilize their prey (Kaston, 1953).  Venom can liquefy or begin the digestion process to enable spiders to eat liquid.  Some spiders eat liquefied prey and some use jaws to chew their partially liquefied meal. Spiders usually are timid and rarely bite humans (Hillyard, 1994).  Spider bites of a few spiders, such as the black widow and the brown recluse, are considered medically important and can harm people (Crawford, 2013).
Two-part body.  The body of the spider includes two sections:  the cephalothorax (a combined head and thorax) and the abdomen. Between these two parts is a narrow waist called a pedicel.  All arthropods, including spiders, have an exoskeleton and grow by “molting” and shedding their exoskeleton (Gertsch, 1949).  They have no internal skeleton and are invertebrates.
Cephalothorax. The cephalothorax includes the head and thorax.  From the top side, the spider appears to be one piece covered by a shell or carapace (Kaston, 1953).   There is, however, often an indentation or “groove marking the boundaries between the head and thorax” (Kaston, 1953). One reason identifying some species of spiders can be difficult is because the exoskeleton of some species can change colors depending on their habitat (Gertsch, 1949).   The cephalothorax also includes the mouthparts and the eyes.
Photos of Anatomy;  (9) front, (10) mouthparts, (11) carapace, (12) abdomen, (13-14) tarus
(photos:  wikimedia commons)
Abdomen.   The abdomen protects the digestive tract, reproductive organs, and lungs (Gertsch, 1949).  Spiders spin silk through spinnerets located at the bottom of the abdomen.  Although all spiders can spin silk and use silk in many ways during their life, not all species create webs (SNMNH, 2014).  The spider’s silk is a protein and is produced in glands that end in the spinnerets. Silk is spun as a liquid and then hardens (Snow, 1970).  It is incredibly strong and can withstand a lot of stress. Scientist are trying to recreate spider silk in laboratories because it could have many manufacturing and health-care related uses, but harvesting silk in large quantities is impractical (Brooks,  2013).
Check out a spider spinning a web....
Legs. The spider has eight legs, in four pairs that are connected to the cephalothorax (Waldvogel & Apperson, 2008).  The legs are jointed and have seven sections (podomeres). There are claw-like features at the tips the legs, and they also are covered with “comb-like setae” (Snow, 1970).  These hairs, which also cover parts of the body of the spider, help some spiders in spinning webs, catching prey, and sensing movement in their webs or on the ground (Gertsch, 1949).
Pedipalps.  The pedipalps might be mistaken for a fifth pair of legs.  They look like short antenna-like legs at the front of the cephalothorax and just to the side of the chelicera.  Spiders use pedipalps to help catch prey, eat, build webs, and in males it is used to transfer sperm into the female (SNMNH, 2014; Snow, 1970).  “Each female usually lays several batches of eggs during her lifetime, but requires only a single mating” (Snow, 1970).  This feature of the reproductive system of the spider has led to the evolutionary success of spiders and their biodiversity
Giant House Spider Cleans Mouthparts with Pedipalps.....
Powered by