Spiders in History and Literature 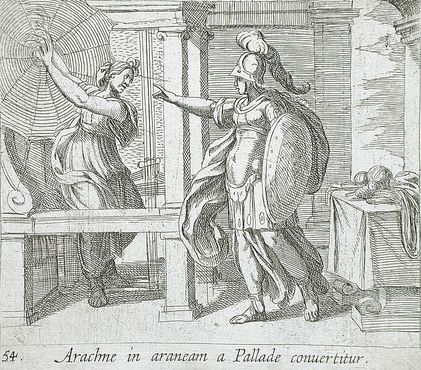 Spiders in Early Writing and Mythology
Before the time of written language, humans recorded their fascination and fear of spiders on the walls of caves.  It is not surprising that early mythology and creation stories of cultures throughout the world feature spiders predominantly.  Creation stories from western Africa and Native American Navajos, Pueblo, and Cherokee tribes focus on spiders (Hillyard, 1994; Gertsch, 1949).  In Greek mythology, Ovid tells the story of Athena the goddess of wisdom turning the weaver Arachne into a spider (Walker, 2004).  In addition, teachings in both the Bible and the Koran mention spiders (Hillyard, 1994).
Athena changing Arachne into a spider
Artist:  Antonio Tempest, 1606 (wikimedia commons)
Spiders in Children's Literature
Children’s literature famously includes such rhymes such as Itsy Bitsy Spider and Little Miss Muffet (Alchin, 2009). Charlotte’s Web (White, 1954), a favorite book of school children, describes the universal admiration and fear of spiders:
“I’ve got a new friend, all right. But what a gamble friendship is!  Charlotte is fierce, brutal, scheming, bloodthirsty --- everything I don’t like.  How can I learn to like her, even though she is pretty and, of course, clever?”
Powered by